Only between 2016-17, about 171,635(*) immigrants crossed the mediterranean sea to a European destination. There isn’t an exact number that can tell how many stranded teenagers (13 to 19 years old) where on refugee or illegal migrant status, even despite being minors or unaccompanied. These numbers evidence the lack of protection towards displaced children who are forced to grow their emotional and cognitive identity, distorted by the disproportion of opportunities between the African continent and the European Union domains.

Historically, the Maghreb served as a crossroads for trade, colony, and migration in-between Europe, Africa, and the Middle East. But Morocco is the synonym of an exit point. Sub-Saharan immigrants make their route through the desert until they reach mayor cities like Casablanca, Rabat, or Marrakesh. Algerians, Tunisians, or even Moroccans, try their way out from the Spanish enclaves of Ceuta or Nador. People in transit, cities collapsed, and deadly routes.

Through interviews, photographs, and access to their archives, this reportage shows intimate aspects from their journey that, despite their young age, finds them in a constant state of risk and uncertainty for an opportunity to cross into European soil.
In collaboration with the NGOs Minority Globe and Open Arms, this reportage aims to raise the awareness of a young generation that is risking their lives and the enormous potential to contribute, in any society they want to integrate as long as they can have access to those opportunities.
(*) Source: IOM, 2018.

CASABLANCA
In the Harbous neighborhood, nearby the ‘Casa Voyager’ train station in Casablanca (Morocco), there is an open site where about two hundred teenagers, mostly sub-Saharian illegal immigrants. They are indefinitely settled in the city until they reach enough money again to continue with their journey.
Kids who left their families months or even years ago in some cases are now living homeless and without any opportunities to find a legal job or health care. Under a total unprotection, the risk of being arrested by the Moroccan police is imminent. Many of these kids have been detained and carried to the southern border, as another Moroccan policy to deal with the migration crisis. Almost all of them start all over again. 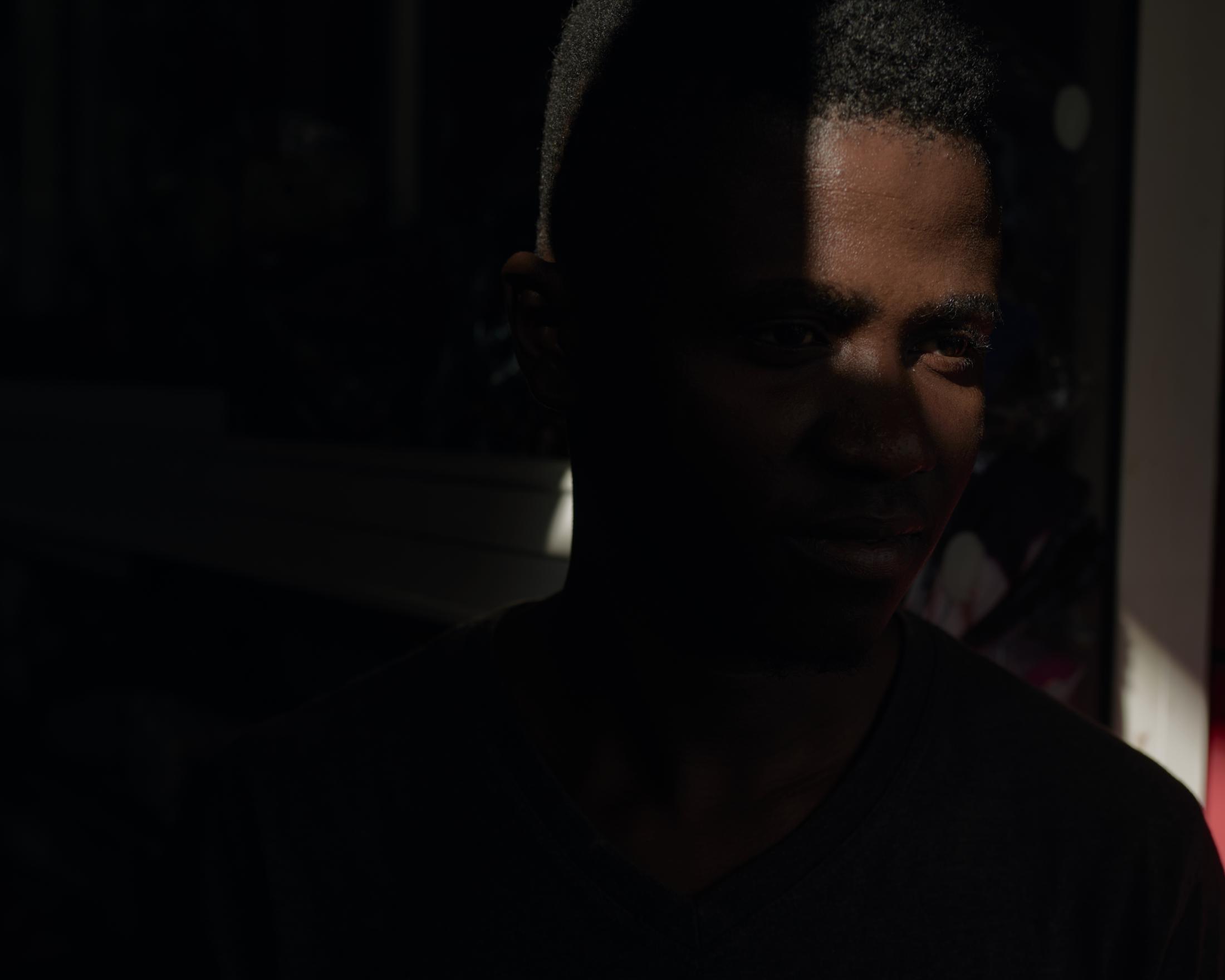 Alamby, 16yr., left his home town in Guinea Conacrky two years ago, and since then have worked and stopped among the route, to pay off human traffickers to complete his journey. He explains in an interview: “My situation is not easy, to have left Guinea so far today, as a child from a low-income family. I did not know the situation in Morocco before coming here. For me, this has been another life. To cross the sea and reach Europe, they ask for a large sum of money, which goes beyond my means. Given my current situation, I think I can get on all by myself. I need two or three years. At the moment, I do not have a good job”. Casablanca, Morocco, 2019. Casablanca, Morocco, 2019. 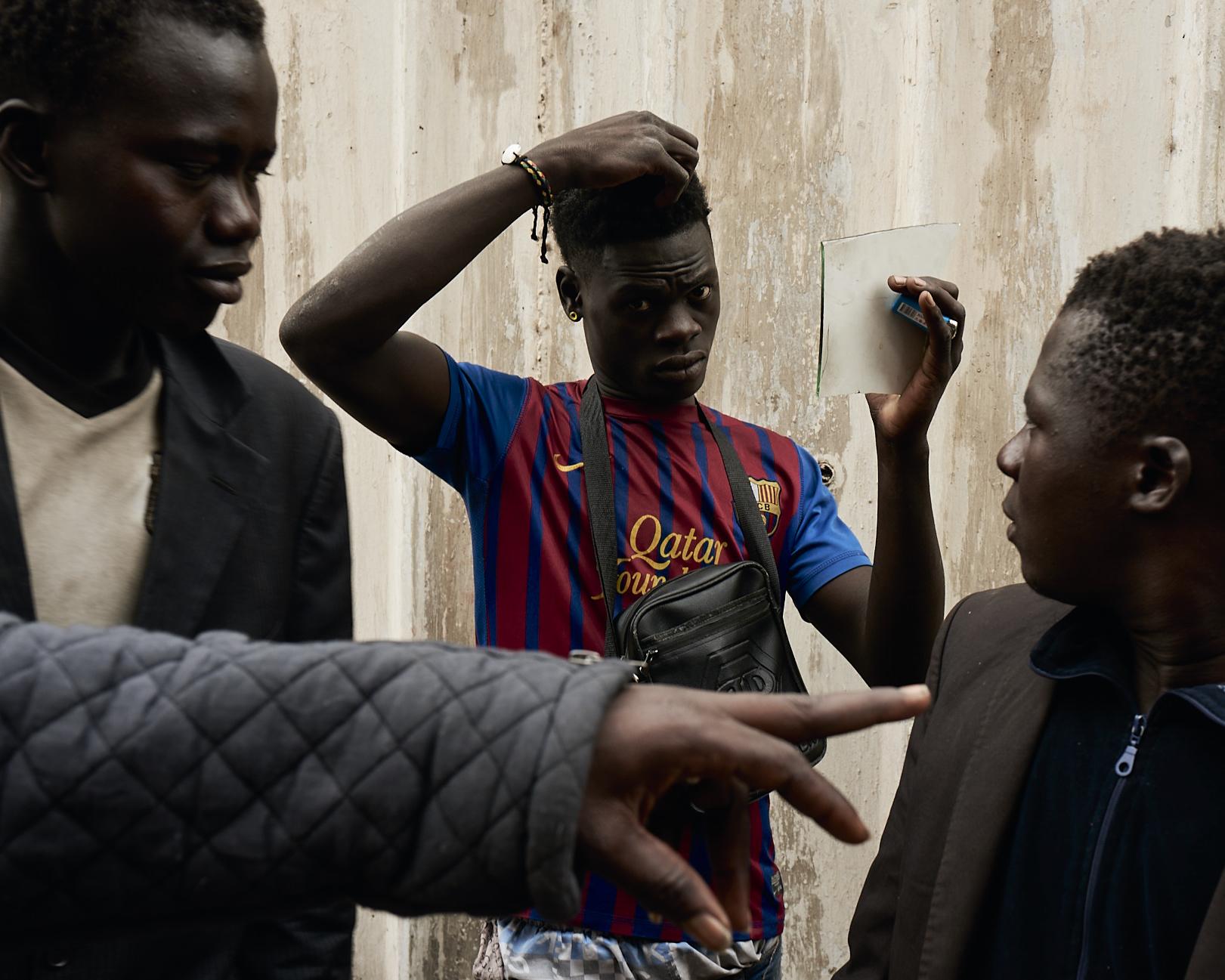 A group of young boys prepares themselves for an individual portrait session, that after went sent as a photo-postcard to their families who have lost contact since the beginning of their journey. Casablanca, Morocco, 2019. 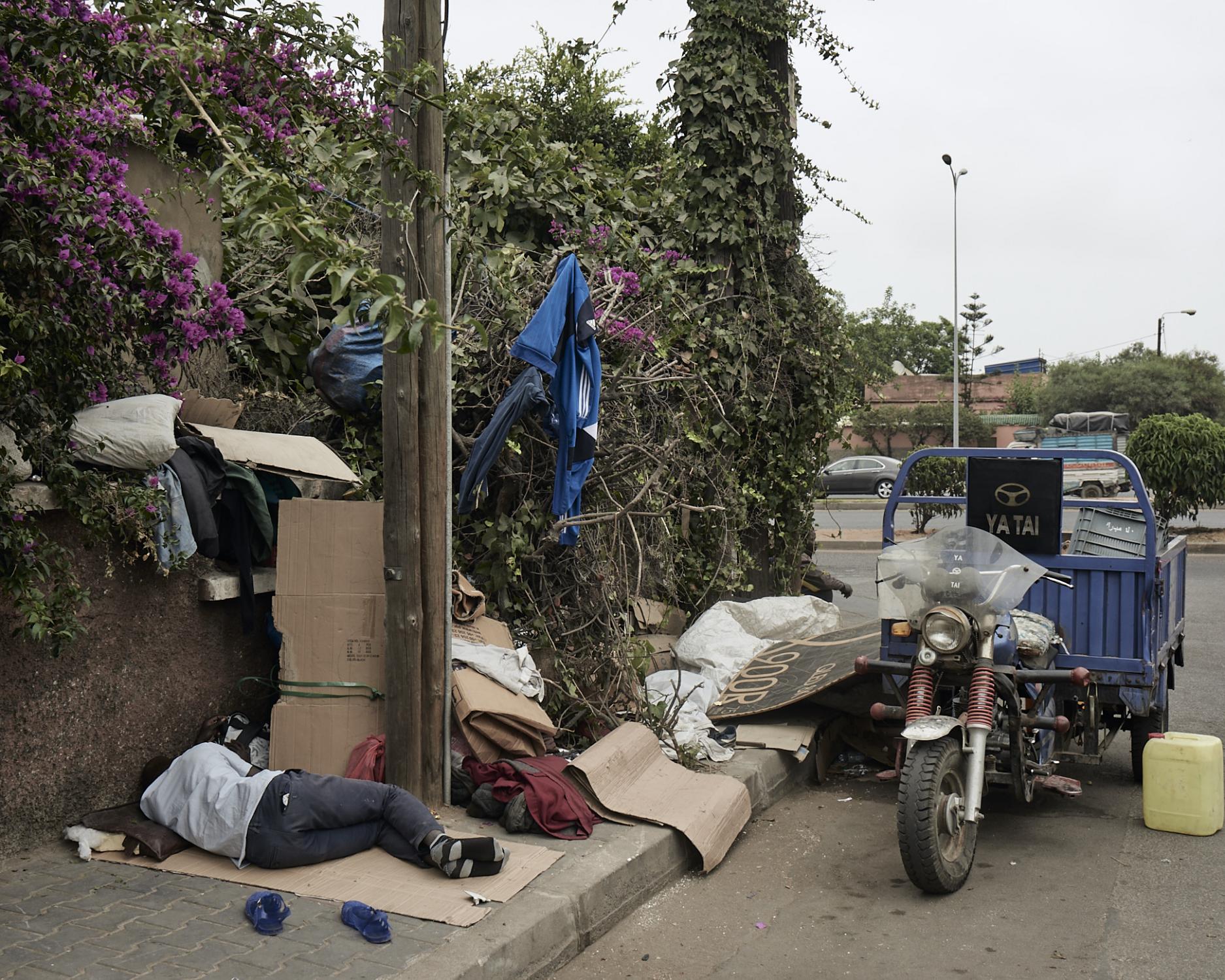 Without access to health care, job, and after crossing the Sahara desert for almost two weeks by foot, they come to Casablanca to deal with the frustration of being stranded in the middle of the route. This limbo forced them to live on the streets where they barely survive under very precarious conditions, in the middle of the biggest city, principal port, and economic capital of the Kingdom of Morocco. Casablanca, Morocco, 2019. 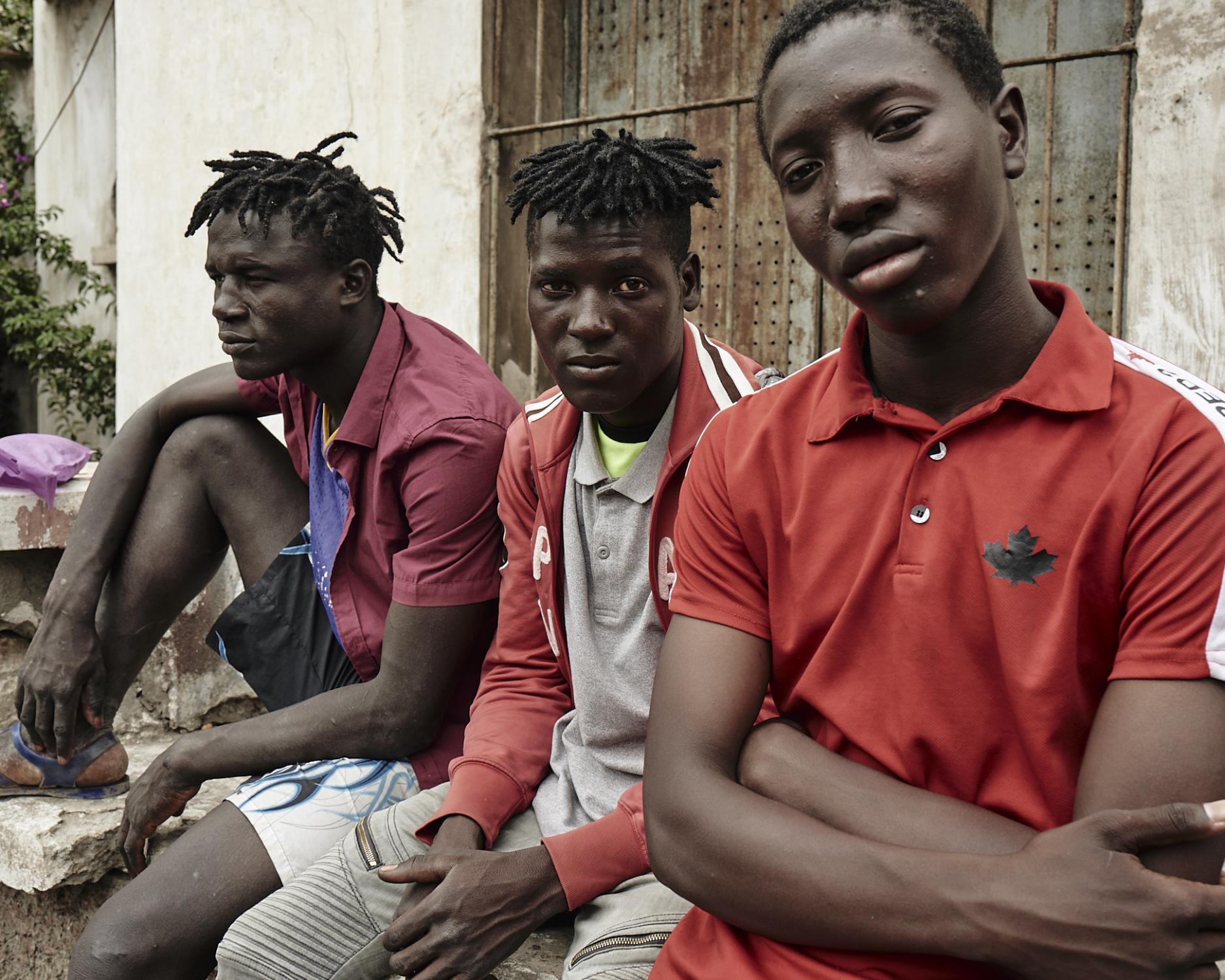 A group of teenagers poses for a picture. Unemployment and precarity stuck them without chances to keep moving ahead north when they finally risk their lives to cross the strait of Gibraltar. Casablanca, Morocco, 2019.
CEUTA
The city of Ceuta, under the Spanish domain since the year 1995, is a strategic enclave inserted on Moroccan territory. This 18.5 km2 piece of land, it is one of the main exit points to Europe, separated from by the strait of Gibraltar by only fourteen kilometers. The city doesn’t belong to the European Union and has an exclusive agreement with Moroccan citizens who reside nearby the area, allowing them to enter but not stay over the night. This way, many Moroccan teenagers who left their farm towns in the Rif, stay over for months waiting to smuggle into cargo buses or ships who are crossing to Europe.
On Ceuta’s industrial area, near the port where the smugglers hang around, groups of kids live inside the exposed cracks of seawalls next to the water. Gathered in small groups, the ‘MENAS’ (Menores no AcompanÌƒados or Unaccompanied Minors) mostly underage boys, sleep on improvised beds made out of pallets, drink water from the public showers on the beach, begs money on the streets, and spend their hours smoking hashish while they wait for the right time to jump the fence of the port. 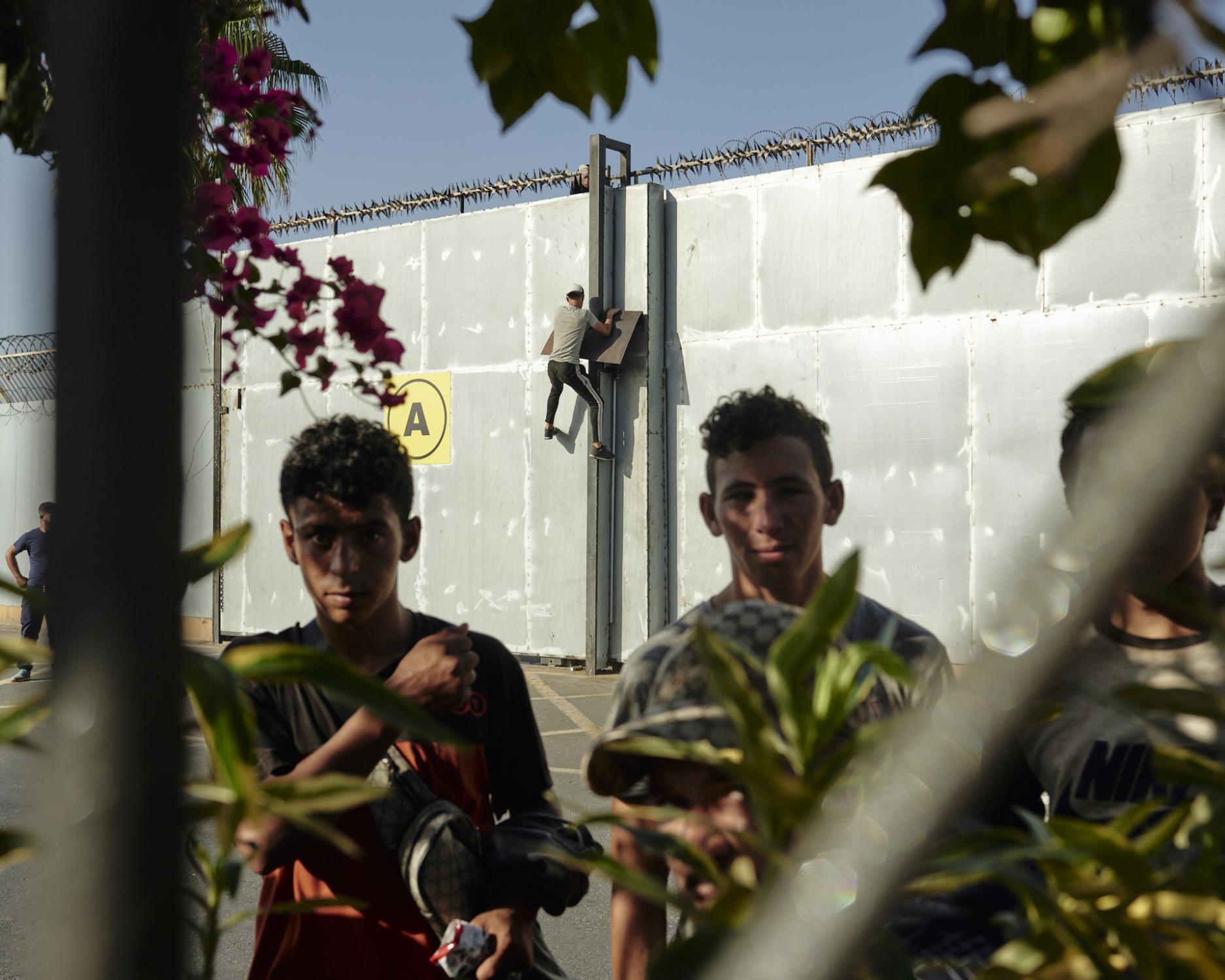 Once immigrants manage to trespass into Ceuta, the next step is to reach the port and try to smuggle into a truck or a cargo ship. When the police do not apprehend them, just a few of them can make it, since the high rate of mortality for hiding down a truck chassis. Ceuta, Spain, 2019. 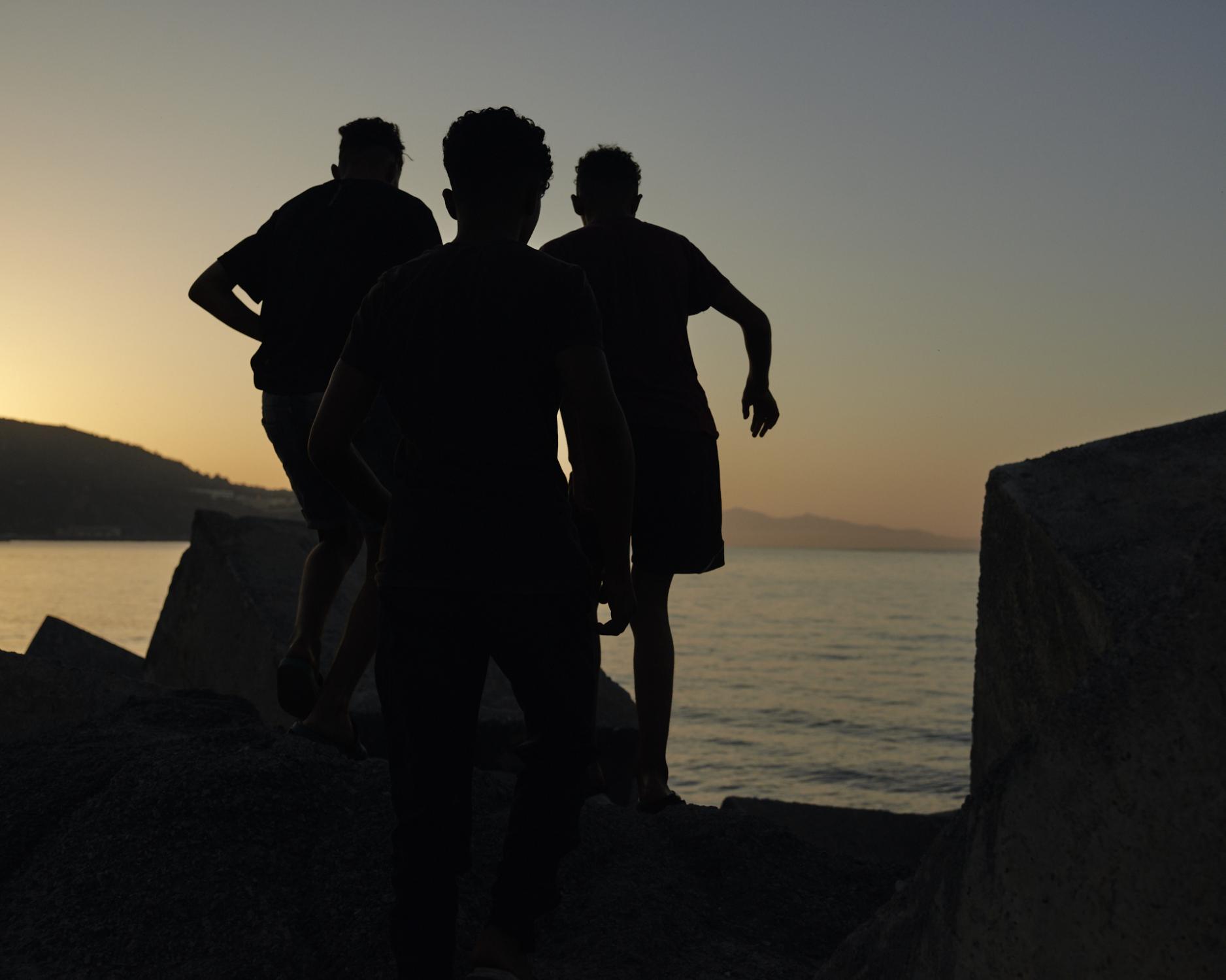 A group of kids jumps over seawall rocks nearby the boardwalk in Ceuta.
Plagues, cold, and starvation. A daily life scenario for the MENA (Menores no AcompanÌƒados or Unaccompanied Minors), who premeditated stayed longer in the Spanish enclave. In most cases, separated from their families, these now homeless kids see as the only option to live on the limbo, as now they are an object of deportation or permanent ban. Ceuta, Spain, 2019. 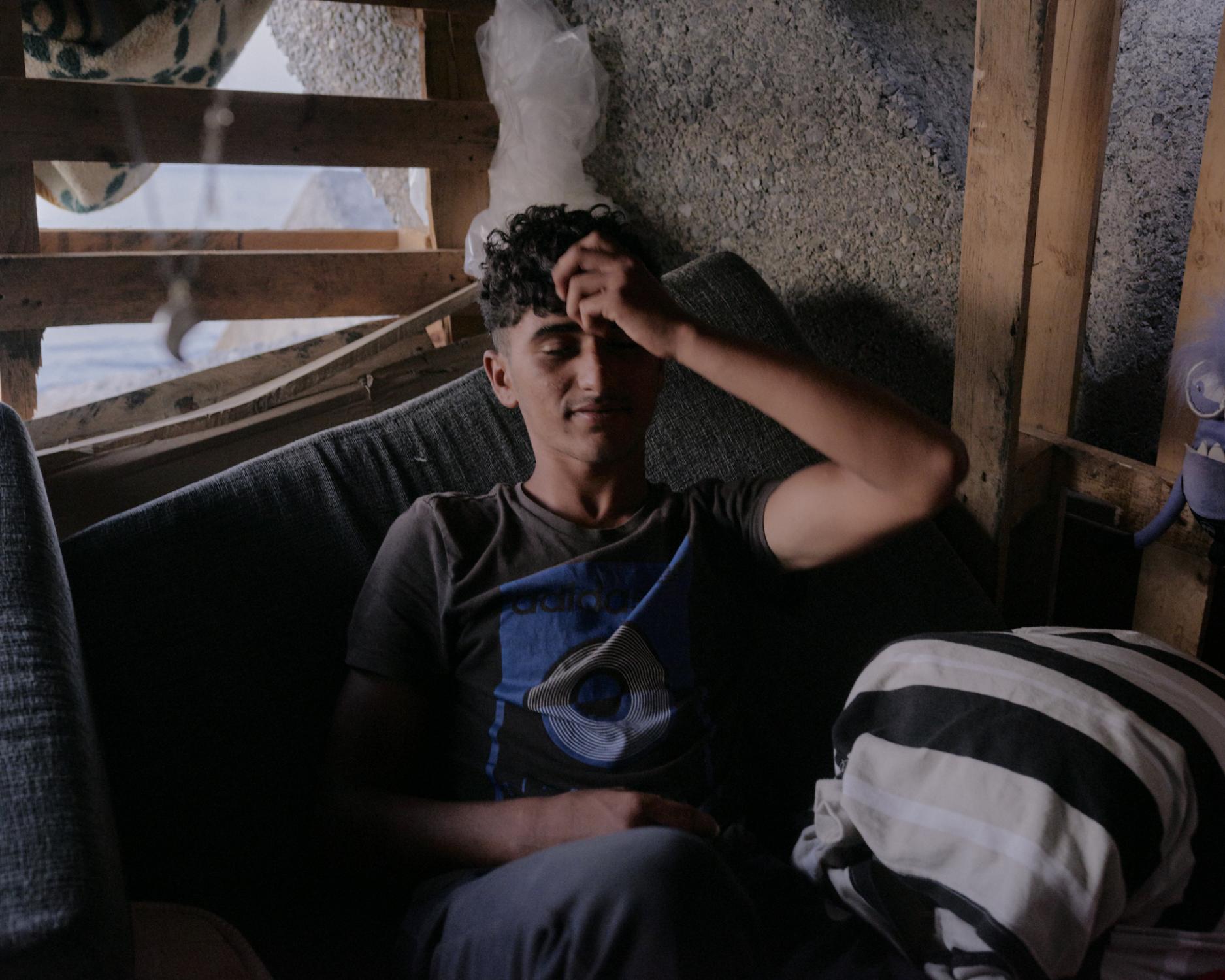 Halima, 14yr., left his home town of TetohuaÌn four months ago, lives in an improvised bed made out of pallets, inside the cracks of the coast seawall.
He explains: ‘My only wish is to leave. To learn languages, Spanish, English. I want to get a job, and with that, I want to help my family. My mom. I don’t have any chance to have a better life living on the farm. I want to study, be a better man’. Ceuta, EspanÌƒa, 2019. 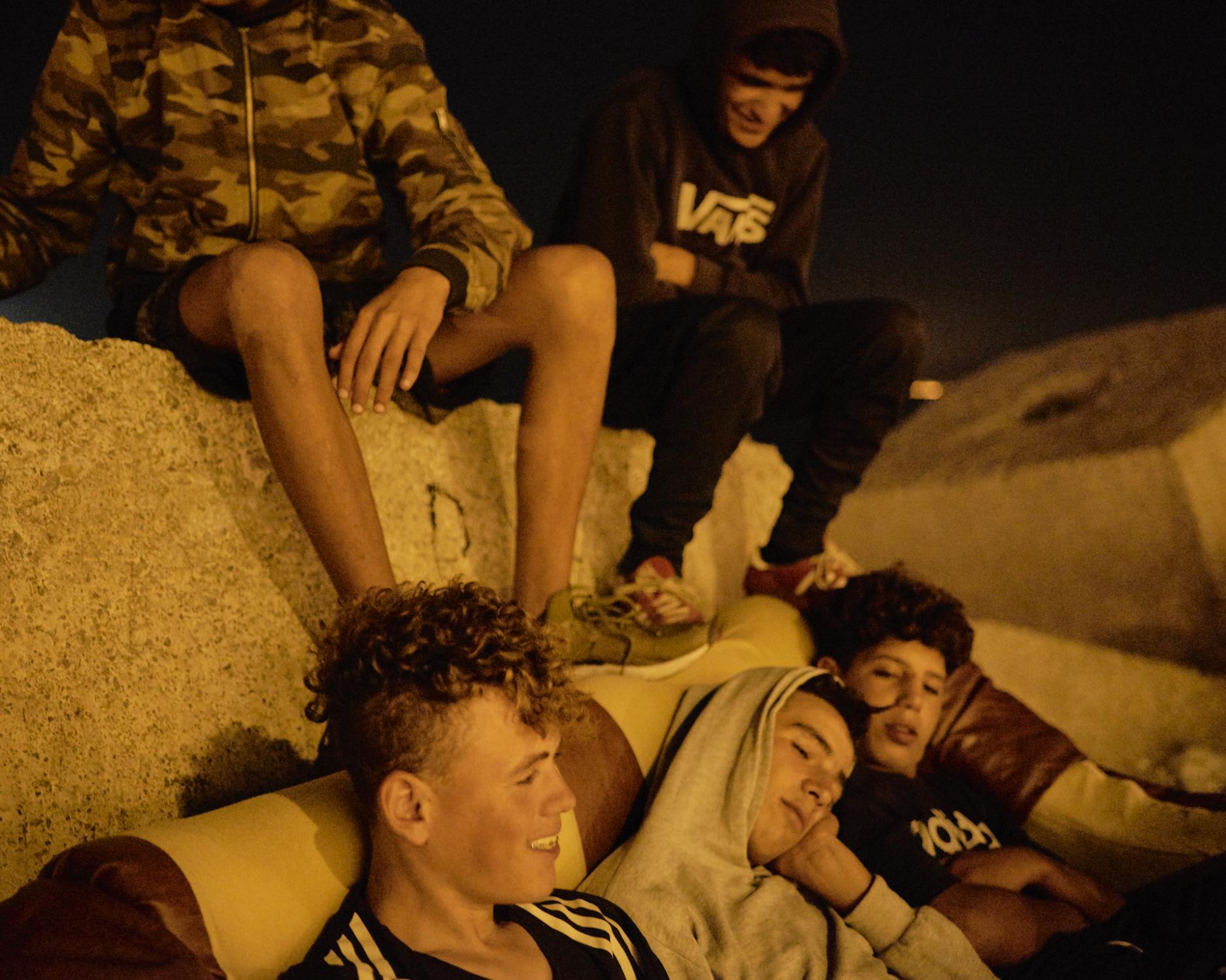 Kids resting over an abandoned couch in the industrial sector of Ceuta, spending the night divided into groups as a strategy to take care of each other in case there is a Police raid. Ceuta, Spain, 2019. 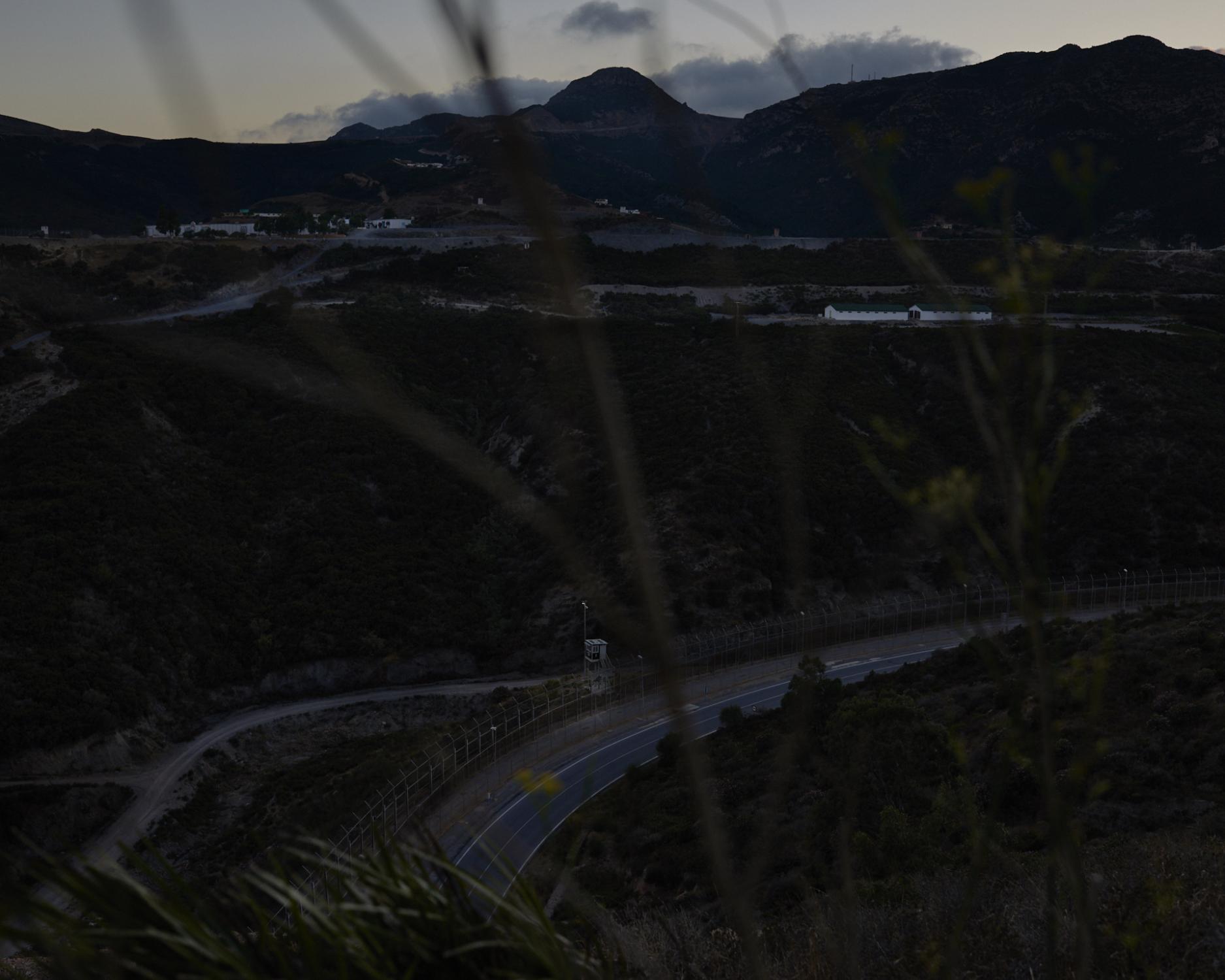 The Ceuta fence, it is the most fortified border in the world. Opened in 1995, the Kingdom of Morocco still does not recognize the Spanish autonomy over this enclave city. The fence, guarded by the Spanish army, is one of the main spots to trespass points among the north-African migrant routes. Ceuta, Spain, 2019.
TANGIER
Hidden in Tangier, Morocco, groups of mostly sub-Saharian illegal immigrants arrive in this old and touristic port to prepare for the main stage of their journey. Cross The Mediterranean by boat.
Here is where they remain hidden in the cosmopolitan Medina, living in overpriced apartments due to their lack of proof of rent, working on flea markets, and gathering in the streets, remaining anonymous, and planning for the last resort to escape Africa. Always risking to be dragged down the south by the Moroccan police, or even deported, these teenagers often wait for the right equation in between optimum weather conditions, budget and over ten people to bring an inflatable boat to set sail route to Spain. 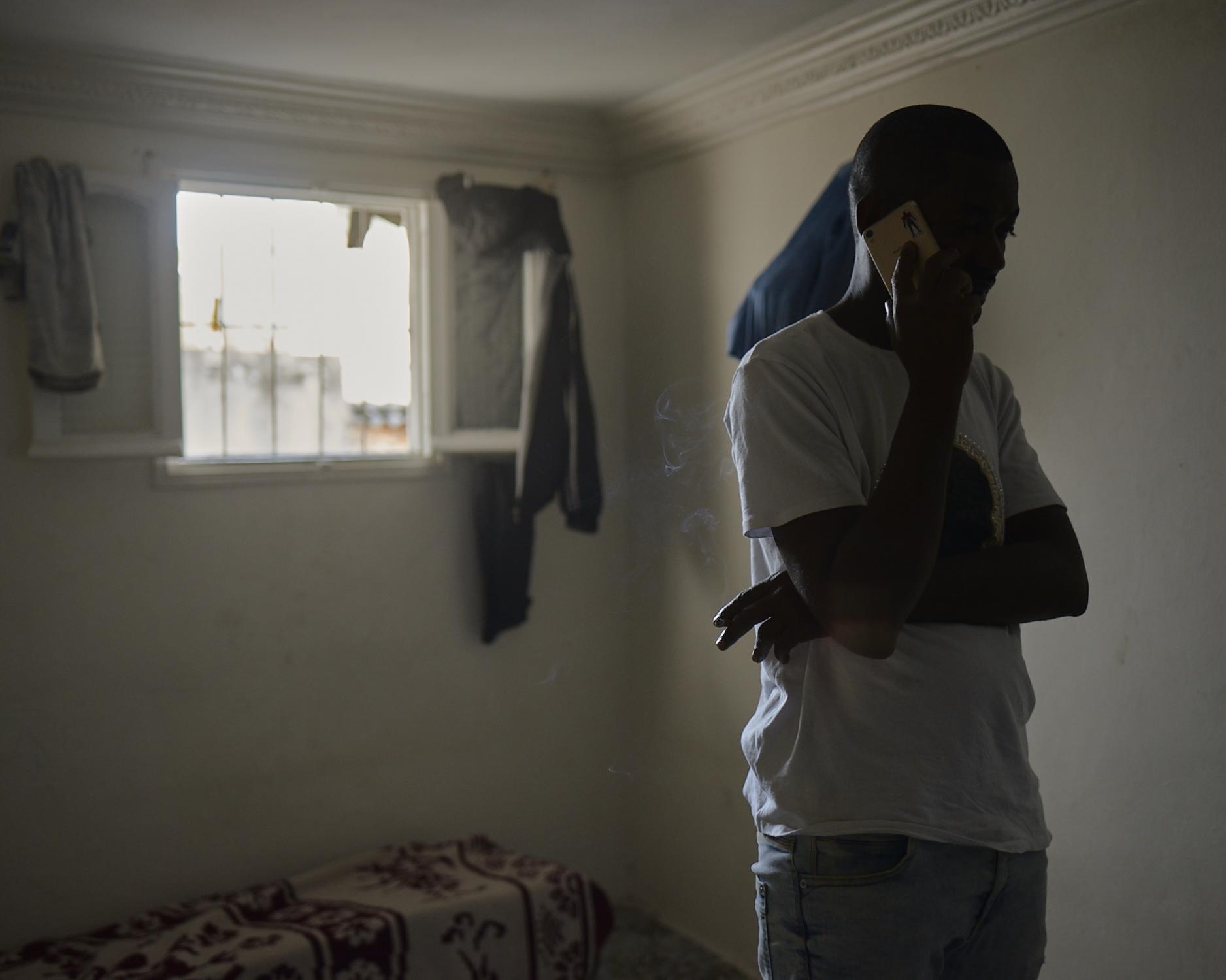 Ismael, 25yr., Speaks on the phone, coordinating the buy of an inflatable boat, commonly known as ‘Patera,’ that is used to transport immigrants on the 14 kilometers of ocean. He lives in a squatter apartment, where he shares a two-bedroom space with nine illegal immigrants, mostly hiding all day. Tangier, Morocco. 2019. 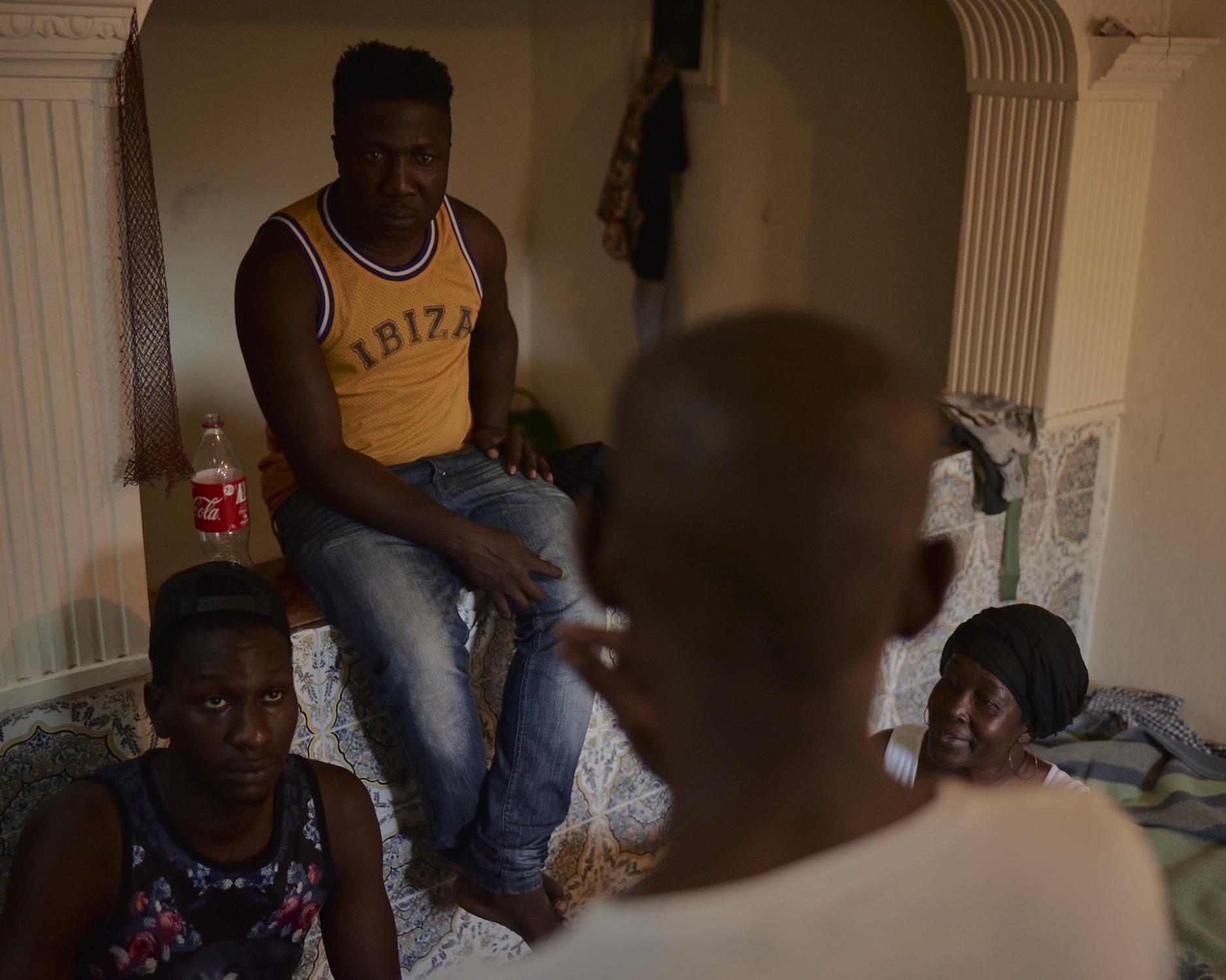 A group meeting at the ‘Patera’ house, where they discuss the chance to buy an inflatable boat for themselves and try to cross before the winter comes, where conditions are the worst.
He explains in an interview: ‘Many employers steal money from their employees. They steal the money people raise. You know, it’s tough to cross. Apart from getting money and dealing with the navy... we had to deal with those guys who took our money. They asked us for money to cross the border. They took the money to their homes. They took all our money and ran away. We are here suffering.’ Tangier, Morocco. 2019. 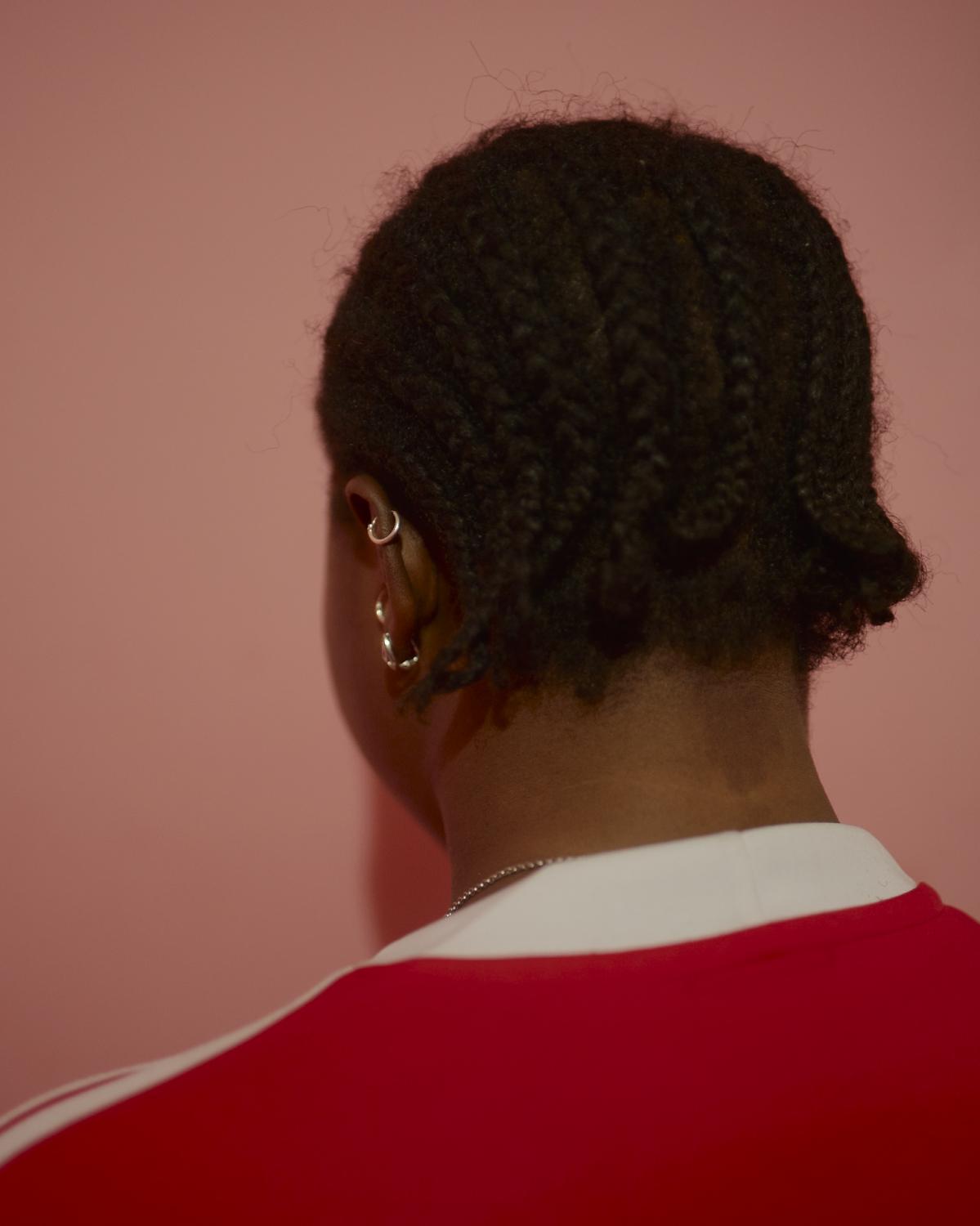 Khady, 27yr., came from Senegal five years ago, leaving behind a one year toddler at the care of her family.
She is recognized as one of the first women who were able to cross the border fence in Ceuta. Before that, she tried several times and got caught by the police, as she explains in an interview: ‘We went there (to the fence) when there were many strikes, three strikes. That day, I said to myself, I must leave. I left with my friends, a girl, and three boys, we went there, where we were supposed to strike, we started to climb when the Moroccan police intercepted us. They took us to Oujda (northern city border with Algeria). Tangier, Morocco. 2019. 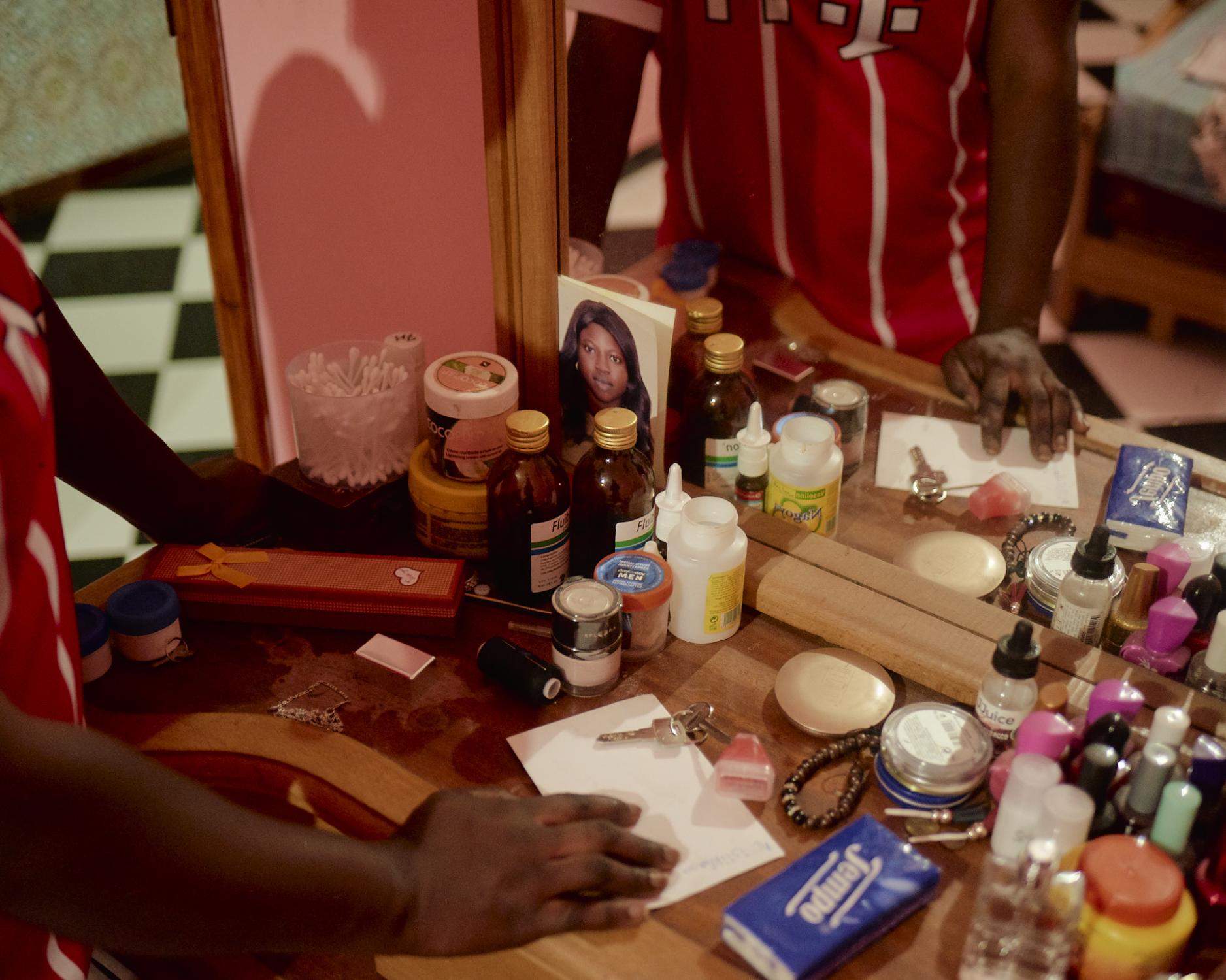 The first year Khady arrive in Tangier, she met a Moroccan family that let her stay with them for a month. She ended up leaving for what she accuses of racism. After that, she decided to return to Senegal, but run into an old friend who advised her to reach the NGO Watch The Med, who were starting to work in the project AlarmPhone, an international group of activist that established a self-organized hotline for refugees in distress in the Mediterranean Sea. Now, Khady has been working for more than five years, and it is the primary contact in Tangier.
Besides her work helping other immigrants crossing the ocean, she had tried seventeen times to cross, as she explains in an interview: ‘When I tried for the first time, I reach the international waters zone. The Moroccan navy surrounded us; they took us and brought us back on the mainland. I told myself that I would not give up; because the first thing in my head is to reach Europe.’ Tangier, Morocco. 2019. 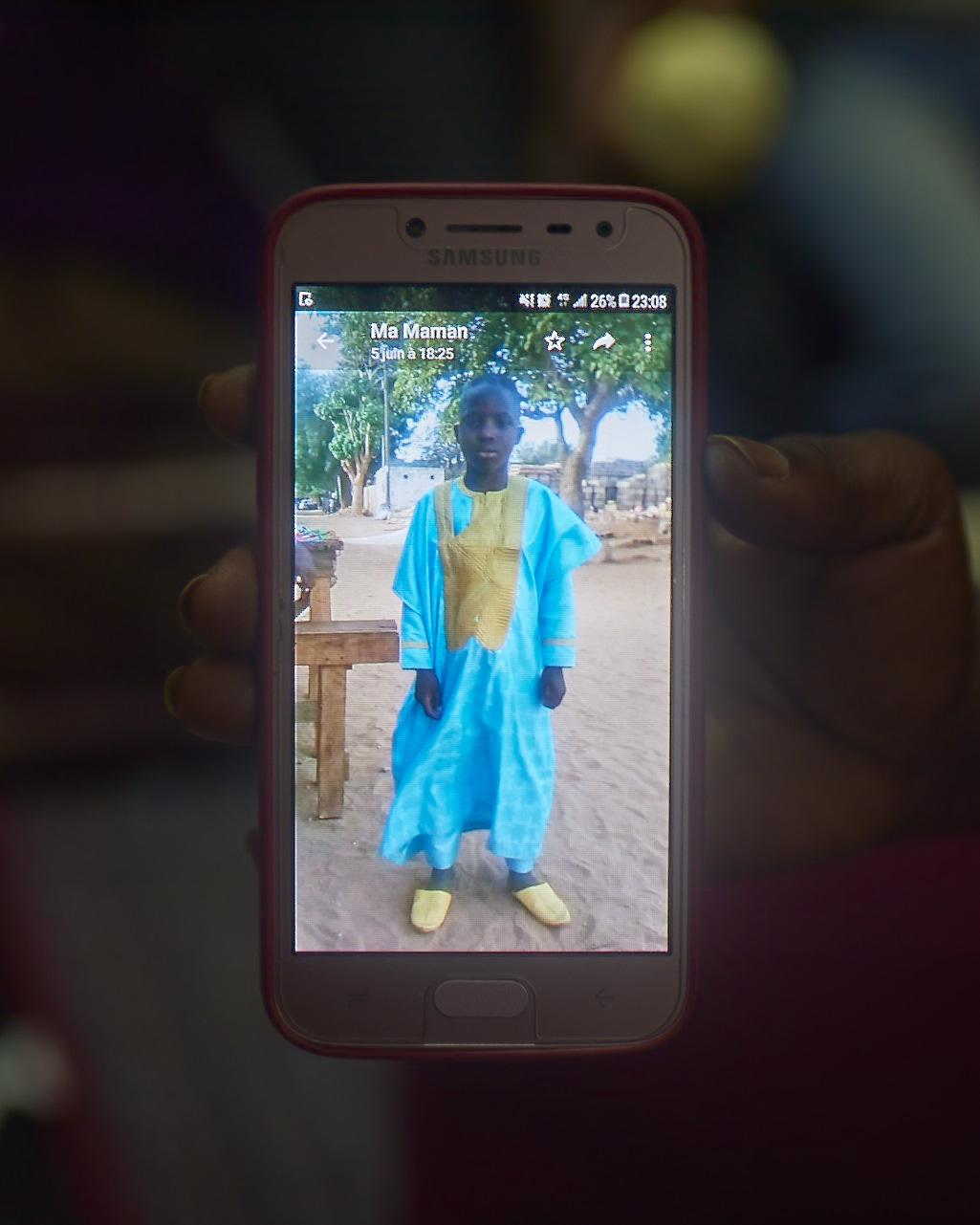 Khady’s son, who today is six years old, is still living at her parent’s house in Senegal. They have not seen each other in person since she left. Tangier, Morocco. 2019. 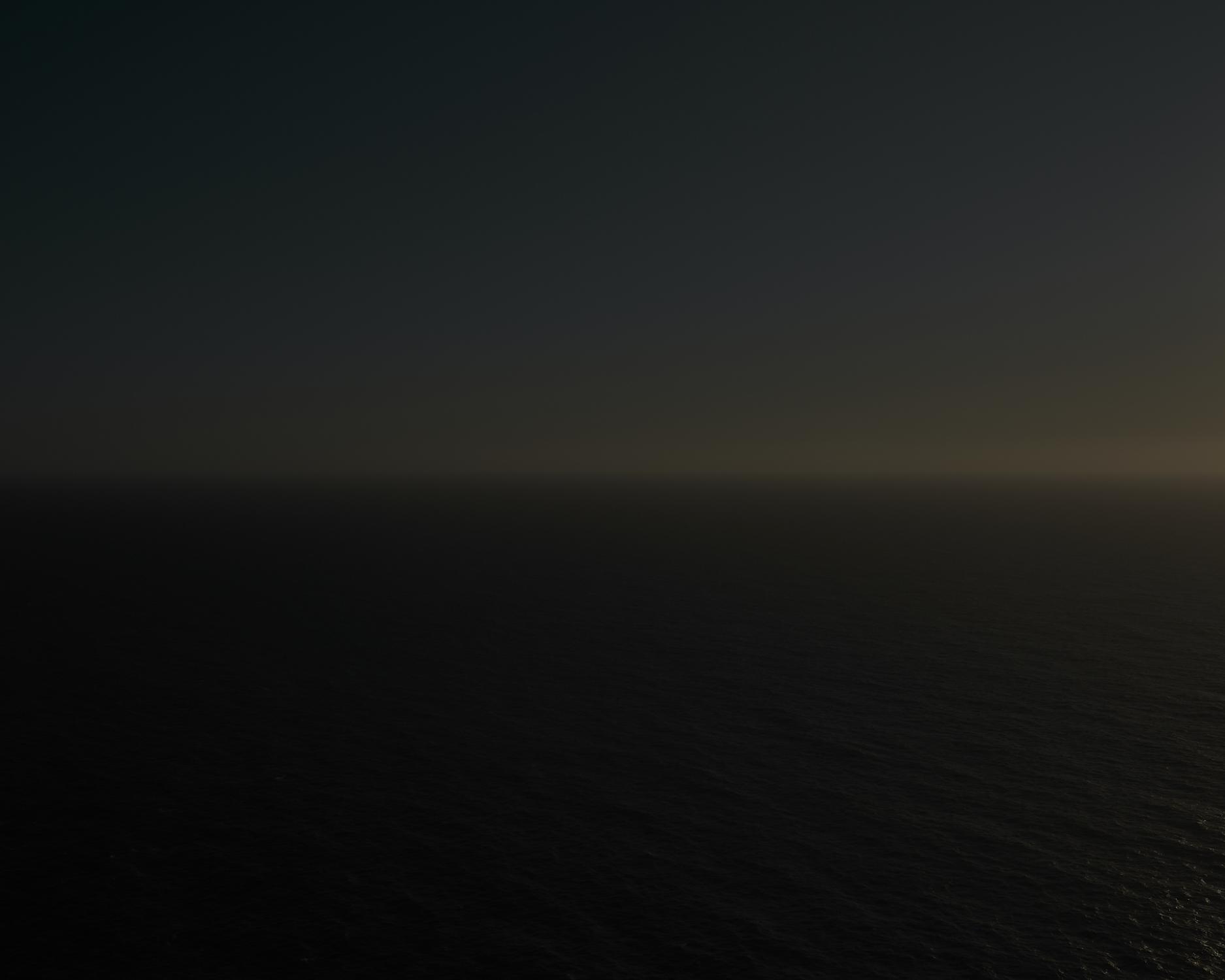 Only in what goes from 2019, 1071 missing immigrants have been confirmed dead on the mediterranean sea. Tangier, Morocco. 2019.